(Post made at 0055 UK BST time on 8 Sep 2018 in a personal capacity.  Please see here for important background and disclosure of interests).

The investigator (from ViewHR Limited) who in my opinion did such a questionable job of "independently investigating":

was a member of the Employment Lawyers Association (ELA) both at the time of the investigation and until a few days ago.

Incorrect claim on his/her ELA member page that he/she was a practising solicitor. Was an ELA member despite not being entitled to be one


Employment Lawyers Association (ELA) members self-certify that they are practising solicitors or barristers who spend at least 25% of their time practising employment law (see the bottom left of https://www.elaweb.org.uk/membership). 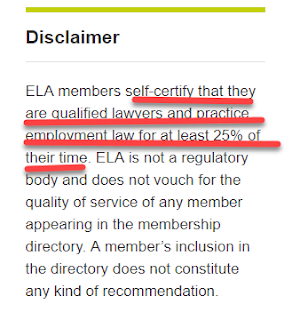 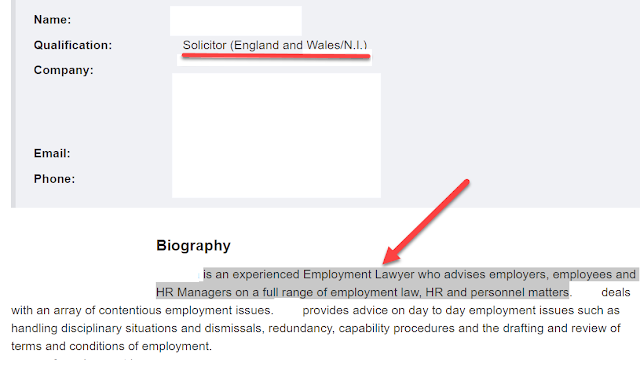 The ELA website makes clear that to be a qualified solicitor for the purposes of membership, the solicitor must be currently on the roll of solicitors. 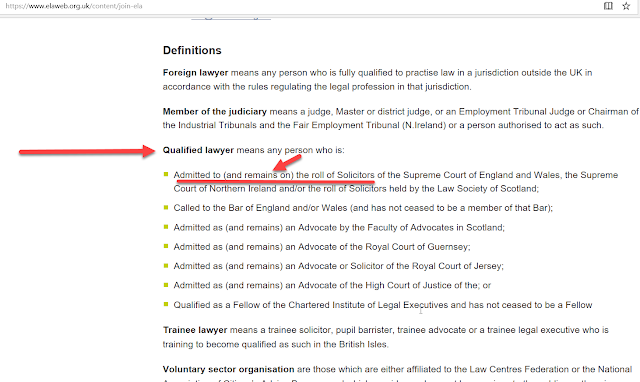 Conducting a search for ELA members within 20 miles of Bournemouth showed a list of 20 members, 19 of whom appear to be current practising solicitors, and one (the investigator) who is not.

I contacted the ELA 4 days ago to query (given the above) whether this person was entitled to membership, or to have claimed on his/her ELA member page for the past two or more years that he/she was a solicitor if (as evidence shows) he/she ceased to be on the roll of solicitors at least 2 years ago.

I also said that I had very significant concerns about the quality of the work performed by him/her in an "independent investigation" carried out last year. They promised to investigate, having previously thanked me for bringing the matter to their attention.

The investigator's membership has now ceased


I noticed earlier this evening that a) his/her member page on the ELA website has been removed, b) he/she no longer comes up in searches of ELA members, and c) the View HR Limited website no longer claims that he/she is a member of the ELA.

I think the 19 remaining members of the ELA within 20 miles of Bournemouth, and all other genuinely qualified ELA members can be relieved that a bogus "Employment Lawyers Association" member, someone who was not qualified to be a member (and whose work in my opinion was highly questionable) is no longer part of the organisation.

(I should make clear that as far as I know the ELA only investigated the question of whether this person was entitled to membership, not the work carried out by him/her).


This further discredits the integrity of the "independent investigation" carried out by this person (someone who was claiming at the time on their ELA member page to be a qualified solicitor, despite not being so), and of the Bournemouth and Poole College relying on the outcome of that investigation and in the College having refused to consider any appeal.


If View HR Limited were regulated I would have made a formal complaint to the regulator, but neither they nor the investigator seem to be regulated, something that seems to be a failing of the "independent investigator" process generally in HR.

It is very important that investigations are carried out without bias and considering all relevant evidence.  It is my belief that View HR.Limited completely failed in their duty in this regard.

At least if this company are involved in any other "independent investigations", they will no longer be able to claim that they are members of the Employment Lawyers Association.