(Post made at 2354 BST on 31 Jul 2017 in a personal capacity.  Please see here for important background and disclosure of interests. Update 01 Sep 2017: response eventually received from the College, please see the comment below this post).

I do not appear to have had any response to my requests, despite asking that correspondence be forwarded to someone deputising for you in your absence:

Please would you provide me with responses to 1 and 2 above as soon as possible, and no later than 1700 on Friday 4 August.

(Post made at 1757 BST on 18 Jul 2017 in a personal capacity.  Please see here for important background and disclosure of interests)

So far this makes a total of 6 supportive witnesses who say they were not contacted, and 2 who were, but were given a very unreasonable deadline (just over three hours before midnight to reply the same day).
Posted by pjlee01 at 17:57 No comments:

If key witnesses for one side are not called, how can the process be impartial? 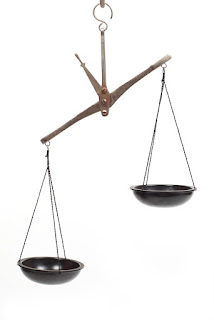 (Post made on 17 Jul 2017 in a personal capacity.  Please see here for important background and disclosure of interests)
Posted by pjlee01 at 11:40 1 comment:

(Post made on 17 Jul 2017 in a personal capacity.  Please see here for important background and disclosure of interests).

This is a follow up to the preceding post.  This is a copy of an email just sent to the Bournemouth and Poole College.

In fact I have since heard that, contrary to the statement in the Independent Investigator outcome letter to me that no witnesses interviewed corroborated my allegations and that no witnesses had been willing to step forward to support my allegations, so far 4 witnesses have confirmed that they were NOT contacted by the College/View HR Limited (the Independent Investigator’s company).  In addition, 2 witnesses had been contacted, but were given an unreasonable deadline (email sent at 2049 on 11 July requesting a response “today”). I also know so far of at least 1 witness supportive of the other person’s complaint who was also NOT contacted by the College/View HR Limited. In my opinion this raises serious questions about the impartiality and fairness of the investigation.

in my opinion, in view of this and other procedural improprieties the outcome of the investigations must be regarded as suspect and neither the College nor anyone else should place any reliance on the investigation carried out by View HR Limited. I understand that some of the witnesses who the Independent Investigator failed to contact will be getting in touch with the College.

Formal complaint to Bournemouth & Poole College was not upheld "no witnesses came forward to support": several confirm they were NOT contacted ...

(Post made on 14 Jul 2017 in a personal capacity.  Please see here for important background and disclosure of interests).

Copy of email sent to Bournemouth and Poole College's Quality Department (the department that handles complaints, any letters or emails of complaint are sent to this department for action)

Thank you for your letter. I am not satisfied with the outcome or the process followed, which in my view contained serious procedural improprieties and irrationality .  Your letter says that the College will not allow an appeal.  Your complaints policy states:

“If at this stage the complainant remains dissatisfied, they will be advised as to which external agency is most appropriate for the complaint to be referred to.”

Please advise me which external agency is most appropriate.

Why was a long overdue CWYM fire drill delayed for over five months, given that 2 fires had taken place recently at the same College site?

(Post made at 1609 BST UK time on 12 Jul 2017 in a personal capacity.  Please see here for important background and disclosure of interests).

A fire drill took place at the Centre for Wessex Young Musicians (CWYM) on Saturday 24 June 2017. To the best of my knowledge this was the first fire drill at CWYM for at least 12 years.

Jacqui Kitcher (JK, Director of Learning, Creative Industries, and line manager of the CWYM Director) had informed me (quite rightly) and the other SWYM Committee members in early January 2017 that a fire drill would take place during the spring term, as one was overdue.  I therefore expected one to take place in the spring term, but:

Two fires had recently happened at the same site

Two fires had taken place at the same site in recent months (the College has 3 sites, and the CWYM rehearsals take place within the North Road site):

Post made in a personal capacity at 0945 BST on 1 July 2017. Please see here for important background and disclosure of interests).

I have just received an email from WhatDoTheyKnow informing me that the College is long overdue in providing a response to my Freedom of Information request of 4 May: 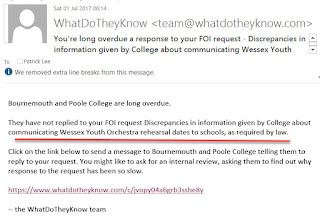 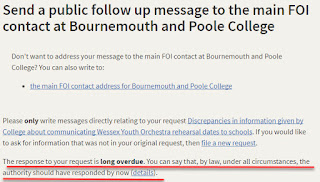 I have just asked once more for the College to comply with their obligations under the law by responding without further delay.