(Post made at 1409 UK BST time on 13 Apr 2018 in a personal capacity.  Please see here for important background and disclosure of interests).

The Bournemouth and Poole College are still advertising the Wessex Starter and Middle Strings courses on their website (see this page) as being conducted by my wife, 11 months after she stopped conducting these groups. (At their request, with no notice or thanks after 13 years, and without explanation until a week later when a pretext was given which was quickly shown to be spurious given accepted practice by other staff at the College).

See this screenshot, taken earlier today (you can click on any image in this post to see a larger version): 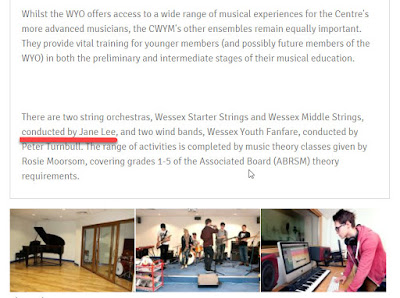 This is false and misleading advertising.

Is this simply incompetence, or is it deliberate, unethical advertising using a very popular teacher's name?


I have documented many previous instances of what in my view is clear unethical behaviour by the Bournemouth and Poole College (e.g. falsely claiming that CWYM/SWYM was a charity, giving false statements in Freedom of Information responses, and in communications sent to neighbouring schools, and relying on a complaint "investigation" where supporting witnesses were not interviewed and email evidence was disregarded).

But maybe on this occasion it is just incompetence.

The page does seem to have been reviewed very recently, to show just the enrolment date for this term: 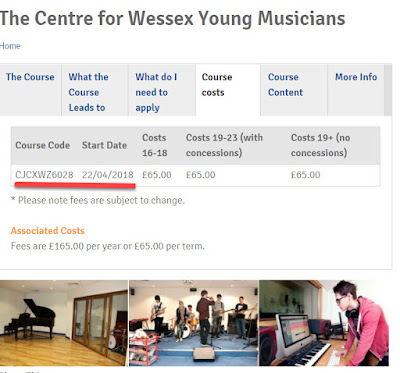 There is some incompetence here, in that the course costs for the year are shown (click on the image above) as £165, which contradicts the figure of £175 quoted in the enrolment letter issued at the start of the academic year: 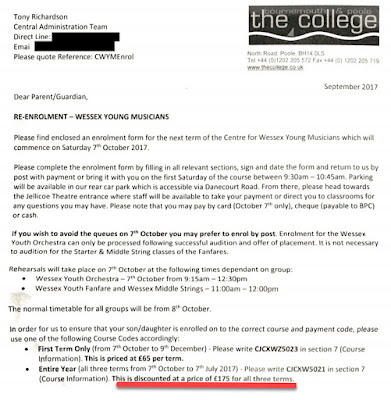 Also, the pictures shown on the webpage above don't show CWYM groups in action, but instead College students from other courses.

The College's CWYM website staff page shows something completely different and almost a year out of date (the name of the guest conductor for the summer term a year ago): 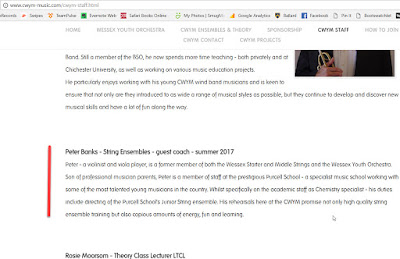 Shouldn't that page show the names of the more recent guest conductors? Will the Wessex Starter and Middle Strings have a permanent conductor again? Will the College disclose to any applicants the way the previous conductor was treated (and any similar treatment in the past)?

I hope the College (who I have made aware of this post) will promptly apologise for and correct its current false advertising.  Because in my experience that is what an organisation committed to ethical behaviour and integrity would do.
Posted by pjlee01 at 14:10