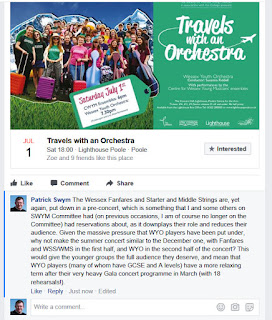 A copy of my comments (on the copy of the Facebook CWYM poster for the concert - on 1 July 2017 starting at 1800 at the Lighthouse by the way).  I don't think my comments will be visible to others on Facebook, so I'm reproducing them below:

The Wessex Fanfares and Starter and Middle Strings are, yet again, put down in a pre-concert at 1800, which is something that I and some others on SWYM Committee had (on previous occasions, I am of course no longer on the Committee) had reservations about, as it downplays their role and reduces their audience. Given the massive pressure that WYO players have been put under, why not make the summer concert similar to the December one, with Fanfares and WSS/WMS in the first half (starting at 1930, not 1800), and WYO in the second half of the concert? This would give the younger groups the full audience they deserve, and mean that WYO players (many of whom have GCSE and A levels) have a more relaxing term after their very heavy Gala concert programme in January to March (with 18 rehearsals in the schedule!).

I was far from the only person on the Committee who felt that putting the younger groups in a separate "Pre concert" was one of several examples of unnecessarily introducing a "them and us" separation between the feeder groups and the WYO.  It would make much more sense to get the groups to work much more closely, and to build up a sense of family/rapport.  (See for example suggestions 10 and 12 here).
Posted by pjlee01 at 01:12